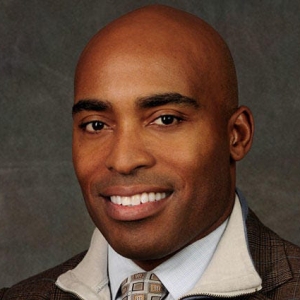 Best known for his time on the field, former New York Giants football player Tiki Barber serves as co-host of CBS Sports Radio’s “Tiki & Tierney,” alongside New York Emmy winning broadcaster, Brandon Tierney. The show, heard across the country from 3:00PM-6PM, ET, airs on the nation’s largest 24/7 major-market radio network. Barber graduated from the University of Virginia’s McIntire School of Commerce (Phi Eta Sigma Honor Society), with a concentration in Management Information Systems in 1997. At UVA, Barber excelled both academically and athletically – football and track and field. He left the Cavaliers as their all-time leading rusher and began a 10-year NFL career with the New York Giants. In January 2007, Barber’s alma mater retired the #21, and in January 2011, he was inducted into the Virginia Sports Hall of Fame, located in Portsmouth, Va.

Barber is one of three NFL players in football history with at least 10,000 yards rushing and 5,000 yards receiving in a career – the other two being Marshall Faulk and Marcus Allen. He retired ranking third all-time in yards per carry (4.7) and 10th all-time in yards from scrimmage (15,632; rushing and receiving). He holds almost every NY Giants rushing record – total yards, rushing yards, rushing attempts and is second in rushing touchdowns. Throughout his professional life, Barber has been active in media and journalism with a variety of appearances. In 1998, he began his broadcasting career working for CBS RADIO’s WFAN, which led to stints at WCBS-TV, Sirius Satellite Radio, the YES Network and Fox News Channel.

Upon retiring from the NFL, Barber signed a contract to work as a correspondent for NBC News and Sports, primarily for TODAY and Football Night in America, but also covering the 2008 Summer Olympics in Beijing for MSNBC. Barber is also an entrepreneur, co-founding Thuzio.com. Thuzio is a marketplace for talent, providing businesses and professionals with an all-access pass to celebrity and sports talent though database, booking and event services. Active in the community, Barber is a board member of the Fresh Air Fund, the Federal Law Enforcement Foundation, the Advisory Board for the Hospital for Special Surgery, and the Emeritus Board of Managers of the University of Virginia Alumni Association.

He is also a founding member of the Leadership Council for the Robin Hood Foundation. Barber has long been an advocate for the underserved and is a staunch supporter of literacy campaigns. He has co-authored, with his twin brother, Ronde, three successful children’s books and eight young-adult novels. He also released a memoir of his playing days, “Tiki: My Life in the Game and Beyond,” in September 2007.